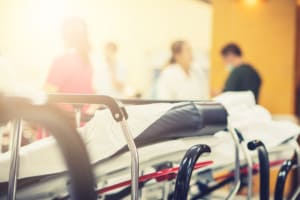 According to Metro Police, the deadly incident happened in the 7000 block of Certitude Avenue. Dispatchers arrived to the area shortly after.

It appears 56-year-old Scott Smith attempted a southbound turn onto License Street, causing the Harley-Davidson to collide with the right side of his Honda. Reports say Smith crossed into the path of 50-year-old Stephen A. Andrews.

Following the accident, Andrews of Las Vegas succumbed to his injuries at the scene. Meanwhile, Smith remained on site and cooperated with police, who believe the man did not show any sign of impairment.

However, because details are limited at this time, a follow-up investigation is currently scheduled.

Our law firm would like to take this moment to express our sincere sympathies to the friends and family of Stephen A. Andrews during this difficult time.

If you’re lamenting the loss of a loved one and refuse to settle with the circumstances, contact the Sweet Lawyers. With a free consultation, we can help you determine your legal options and the next steps in granting you full compensation. It’s never easy having to face and live with the loss of a family member. However, it’s not too late to acquire the financial assistance needed to cover any medical or memorial costs. Call (800) 674 7852 to discuss your case further.