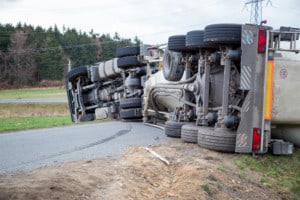 BEAUMONT, CA (March 12, 2019) — A solo-vehicle rollover crash involving a tractor-trailer combo was reported near the Badlands on Tuesday, March 5.

Officers received reports of the crash just before 9 a.m. about a big-rig that rolled down an embankment along the eastbound side of 60 Freeway, west of Western Knolls Ave.

When officials arrived at the scene, they found a tractor-trailer combo that had left the roadway and then went down a steep embankment. The vehicle came to stop in a 20 to a 30-foot deep ravine. The big-rig then rolled over on its side and its trailer flipped upside down.

The truck’s driver and another man had managed to get out from the overturned truck before officials arrived. They were both later seen up and walking around while the CHP asked them questions.

An ambulance crew responded to the crash site and evaluated both occupants from the truck.  Reports from the scene showed that both declined further treatment. It was not immediately known if the big-rig driver or his passenger sustained injuries in the incident.

During the investigation, CHP called for the temporary closure of parts of the freeway. They shut it down for several hours and it caused major traffic delays for morning commuters.

A wrecker worked to pull the damaged truck back into the embankment from the ravine. The truck, registered to JEC Transport out of San Bernardino, was later towed from the scene.

CHP is still investigating the reason behind the incident.

Negligence can lead to a car crash causing damages. By driving safely and abiding all traffic laws, you can ensure your safety and the safety of surrounding vehicles, motorists, and pedestrians. Do not get behind the wheel if you find yourself under the influence of drugs or alcohol.

If your loved one has been involved in a dangerous accident like a rollover crash, immediately reach out to the experienced lawyers at Sweet Law Group. We have over 40 years of experience in the legal field, and we know what it takes to win your case. Let us fight for you, and achieve the justice and compensation that you and your family deserve. Call our offices at (800) 674 7852 for a free, no-obligation consultation with a professional in your area. You can also contact us by email, online chat, and text message 24 hours a day/ 7 days a week.