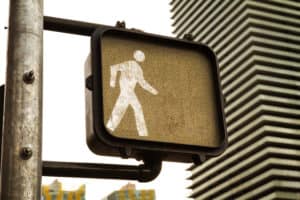 SAN FRANCISCO, CA (March 26, 2018) – A woman was struck by a bus and injured on Market Street while crossing the roadway, late Monday morning.

The incident occurred around 11:20 AM when an eastbound 5-Fulton Muni bus hit a woman on Market Street, just before Fourth Street. A witness stated that the woman was jaywalking, but the bus was traveling too fast.

According to Paul Rose, a spokesperson for the San Francisco Municipal Transportation Agency, it appeared that the woman stepped in front of the bus, entering the bus zone.

After being struck by the bus, the woman was laying in the gutter and appeared to have a large gash on her forehead from the impact of the collision. She was taken to San Francisco General Hospital with a bleeding head injury that was considered non-life threatening.

The San Francisco Police Department is still investigating the incident, and is currently working to obtain video footage from the Muni bus involved to fully investigate the turn of events.

It is important to always be on the lookout in an area with pedestrians, especially if you are in an area with multiple intersections and crosswalks. As a pedestrian, stay alert, keep away from the roadway, and look out for oncoming vehicles. By obeying traffic laws and being cautious of your surroundings, you can prevent unforeseen accidents and keep yourself and others safe on the road.

If you or a loved one was injured in a pedestrian accident, contact the experienced personal injury lawyers at Sweet Law Group. We promise to work for you, until we achieve the proper compensation and justice that you and your family deserve. Call our offices at (800) 203-3061 for a free consultation with a legal professional in your area. You can also reach us 24 hours a day/ 7 days a week by email, online chat, and text message.