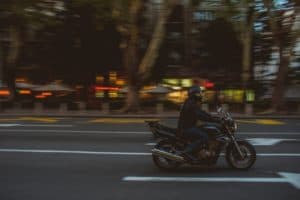 The authorities said the incident occurred at about 2:15 p.m. It involved a 1996 Jeep Cherokee and a 2012 Kawasaki motorcycle.

49-year-old Patricia Knight of Twentynine Palms was driving the Jeep southbound on Lear Avenue. As she approached 2 Mile Road, motorcyclist Rodney Allen attempted to pass her.

Knight made a left-hand turn onto Two Mile Road as Allen passed. That is when the motorcycle collided with the left side of the Jeep.

Allen, who is a corporal with Combat Logistics Battalion-7 on the Twentynine Palms Marine Corps Base, sustained serious injuries. A Morongo Basin Ambulance took him to Desert Hospital in Palm Springs.

The Sheriff’s Morongo Basin Station Major Accident Team is handling the investigation. They said that drugs or alcohol didn’t appear to be a factor in the crash.

Motorcyclists are at great risk so it is important you are aware of them on the road. Always make sure it is safe to make a lane change. Scanning the streets, the next lane over, and using your mirrors can help you be more aware. Avoid accidents at all costs by driving defensively.

Reach out to a seasoned and dedicated personal injury attorney today if you have been injured in a motorcycle accident. The Sweet Lawyers provide the best legal representation that will help you win a settlement. We will work hard to obtain justice and compensation for your injuries, losses, and suffering. You are not alone in this. Call us at (800) 674 7852 for a free consultation.