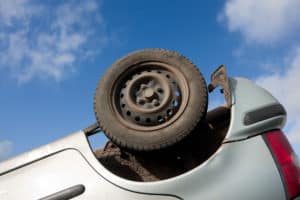 The crash happened around 9:10 a.m. along the westbound lanes of 10 Freeway, between Bob Hope Drive and Date Palm Drive exit.

According to the CHP, a Ford Ranger overturned about 70 feet off the right shoulder of the freeway and landed on its roof.

The driver, who was not wearing his seat belt, was ejected from the vehicle and was pronounced dead at the scene. The Riverside County Coroner’s Bureau identified him as Robert Fry, 59, of Indio.

Witnesses told CHP officers that Fry was driving recklessly prior to the accident. He attempted to correct his path after he began to lose control of the truck, overcorrected, and crashed the vehicle.

Traffic was jammed near the scene, though no lanes were closed.

No words can mend the broken hearts and sorrow felt during this delicate moment. Our deepest condolences and sympathies are with the loved ones and friends of Robert Fry.

If you have lost a family member in a tragic accident, we the Sweet Lawyers would like to offer our legal guidance and support during this time of need. We house wrongful death lawyers who have extensive experience in accident cases. Allow our team to fight for justice and maximum compensation your loved one and family deserve. Call us at (800) 674 7852 for a free evaluation of your case details.