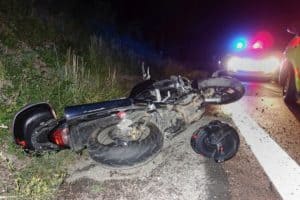 LAS VEGAS, NV (May 31, 2019) – A police officer sustained injuries in a DUI accident on Tropicana Avenue on Wednesday.

The incident occurred around 9:30 p.m., on Tropicana Avenue. First responders arrived near Durango Drive shortly after.

According to reports, the motorcycle police officer sustained injuries after a DUI driver struck him. Medics transported him to a nearby hospital for further treatment. He was reportedly suffering from non-life threatening injuries.

If you or a loved one sustained injuries in a motorcycle accident due to negligent or irresponsible driving of a reckless driver, contact the personal injury lawyers at Sweet Lawyers. We have over 40 years of experience in the field. We know what it takes to win your case and achieve the justice and compensation that you deserve. Call us at (800) 674 7852 for a free case evaluation by a legal professional in your area. You can also reach us 24 hours a day/ 7 days a week by online chat, text message, and email.