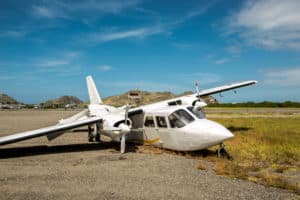 Unknown Cause of Renton Plane Crash at Renton Municipal Airport

According to the Renton Regional Fire Authority, the incident happened around 3:00 PM. The two-seater plane experienced a landing gear malfunction and crashed during landing. As a result, the plane’s fuel tank began to leak.

The Boeing plant booth stated the plane that crashed was a two-seat Cessna 150 model. However, that model has not been in production since the mid-1970’s.

Firefighters stated the two passengers inside managed to escape safely on their own. In other words, they were not injured.

Crews were working to control a small fuel leak from the aircraft. Hence, the airport was shut down during the emergency response. No further information has been released at this time. An investigation is still currently ongoing to determine further details.

When involved in a plane accident, it is important to have strong legal representation on your side. If you find yourself involved in a serious collision, follow these steps. Above all, make sure everyone involved is in good condition. Then contact authorities for medical treatment or immediate rescue. After that, reach out to an experienced legal team.

If you or a loved one was injured in a plane accident, reach out to the experienced lawyers at Sweet Lawyers. We know how to handle mechanical malfunctions and how to fight for the compensation you deserve. Our attorneys and experienced professional legal team have dealt with cases including car accidents, wrongful death, personal injury, and disability. Call our offices at (800) 674-7852 for a free consultation with a professional in your area. For your convenience, you can contact us 24 hours a day/ 7 days a week by email, online chat, and text message.