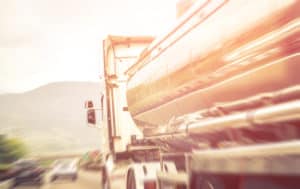 PLACER COUNTY, CA (January 31, 2018) – On Wednesday morning around 10 AM, a commercial tow truck and tanker truck collided in an explosive accident on Highway 20, just 6 miles west of Interstate 80.

The tow truck, owned by Kilroy Towing out of Grass Valley, was driving north on Highway 20, when it veered into the southbound lane and crashed head-on into a tanker truck carrying around 8,400 gallons of gasoline, owned by Williams Tank Lines in Stockton.

Multiple explosions resulted from the crash, and both vehicles were up in flames. According to California Highway Patrol Officer, Chris Nave, emergency crews were not able to immediately reach the wreckage due to the 40-50 foot high flames from the multiple explosions.

Both drivers were pronounced dead on the scene.

Aubrey Henry, spokesman for California Department of Fish and WIldlife, stated that the Department was still assessing the impacts of the spilled gasoline. The gasoline from the commercial tanker truck was eating away at the asphalt on the road. They believe that it may have entered a creek that connects with the Bear River nearby.

Highway 20 was closed between the 80 junction and Scott’s Flat Road in Nevada City, until the flames burned out and the officials investigated. There is still no report on the cause of the crash, or the identities of the victims involved.

Sincere sympathies to the family and friends of the victims in this tragic crash.

If you have been injured in an accident, contact the personal injury lawyers at Sweet Law Group. Our experienced attorneys and professional legal team have years of experience dealing with cases involving wrongful death, personal injury, and car accidents. Call us today to arrange a free consultation to discuss your case (800) 203-3061.