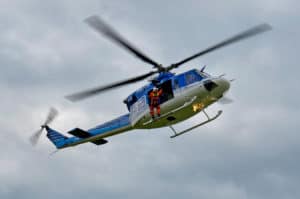 PHELAN, CA (January 18, 2019) – A woman was airlifted following a head-on crash late Friday afternoon in Phelan, according to the California Highway Patrol.

The crash happened around 5:05 p.m. at the intersection of Phelan Road and Smith Road.

A female occupant in one of the vehicles was reportedly trapped and needed extrication. She sustained a contusion to the right brow and was airlifted to a hospital in an unknown condition.

A portion of Phelan Road was shut down by firefighters to allow air ambulance to land.

It is unknown if speed, drugs and/or alcohol were contributing factos in the crash. The incident remains under investigation.

Driving during the busiest traffic hours can be dangerous. With so many people congesting the lanes, people often get distracted, which is when most accidents happen. Keep your eyes on the road and scan for traffic before changing lanes or speeding up. Also, always adhere to designated speeds. You will have more time to react to a hazard and, should a collision occur, it will not be as damaging at a lower speed.

We encourage you to speak with us today if you have suffered injuries caused by a negligent driver. At The Sweet Group, we understand the impact of accidents to the victims; and the financial difficulties they have to go through. Our personal injury lawyers will provide the best legal representation and guide you every step of the way until we win your case. Call us at (800) 203-3061 and let us help you obtain the compensation and justice you deserve.