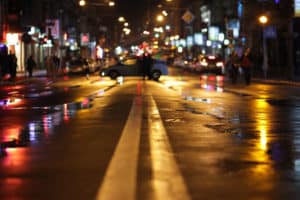 One Killed, One Injured in Two-Vehicle Traffic Crash on Highway 74 [Lake Elsinore, CA]

LAKE ELSINORE, CA (November 21, 2018) — One driver died and another person injured after a two-vehicle crash on the Ortega Highway on Monday, November 19.

The fatal crash took place on the westbound side of Highway 74, near the Candy Store, at about 4 a.m., according to a California Highway Patrol report.

Two vehicles were involved in the crash that left the occupants of both cars trapped, according to the CHP.

According to Officer Mike Lassig, a 25-year-old Lake Elsinore man was driving a 2015 Honda Civic eastbound on Highway 74 when the sedan drifted into the westbound lanes. A 2018 Dodge Challenger driven by a 56-year-old Menifee man was coming from the opposite direction and encountered the coming Honda.

The driver of the Dodge was unable to evade the accident, causing the Honda driver’s front end to crash head-on with the Dodge’s front end.

Lassig stated that the driver of the Honda was not wearing a seatbelt and sustained fatal injuries. The man died at the scene.

The driver of the Dodge suffered major injuries and was rushed to Inland Valley Medical Center in Wildomar with major injuries but in stable condition.

The CHP is still investigating the incident.

We extend our sincerest sympathies to the family and friends of the deceased victim. Wishing them strength and support during this very difficult time.

Choose to trust the experienced wrongful death lawyers at Sweet Law Group to help you win your case. With over 40 years of experience in the legal field, we have dealt with cases including personal injury, auto accidents, wrongful death, and disability. Focus on grieving your loved one, and we will take care of the rest. We promise to fight, day and night, to achieve the justice and compensation that your family deserves. Call us today at (800) 203-3061, and arrange a free case evaluation by a legal professional in your area. For your convenience, we are also available 24 hours a day or 7 days a week through email, text message, and online chat.