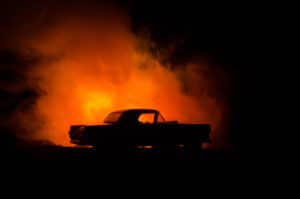 One Dead after Garden Grove DUI Fiery Crash on 22 Freeway

According to the California Highway Patrol, at around 4 a.m., officers received reports about a two-vehicle crash involving a Honda and a semi-truck. They responded on the eastbound side of 22 Freeway east of Valley View Street.

When officers arrived at the crash site, they discovered a semi-truck engulfed in flames with fuel leaking.

The driver of the semi, believed to be a contractor carrying U.S. Postal mail, succumbed to injuries sustained at the incident.

A video from the scene showed packages and mail scattered all over the freeway.

Officers arrested the 26-year-old male driver of the passenger vehicle on suspicion of DUI.

The eastbound side of the freeway opened just before noon, while the westbound lanes remained closed.

Our hearts break for those mourning this significant loss. With deepest sympathies, we hope you find comfort and strength amidst this tragedy.

For a qualified attorney with 44 years of legal practice, the Sweet Lawyers merits your attention. We strive to represent our clients in the best light possible. As your litigator, we will fight tooth and nail for your future and family. Whether you’re unable to make ends meet or are subdued due to a family loss, seek prosecution against the at-fault party. Schedule your consultation by calling (800) 674 7852.