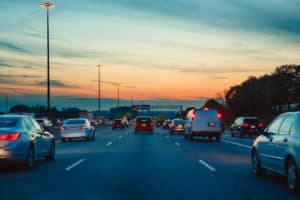 The accident happened just before 7:30 p.m. at the intersection of Lankershim Boulevard and San Fernando Road.

According to Los Angeles police, the male motorist in a dark-colored Dodge Charger was either racing with or driving recklessly alongside a white Dodge Charger eastbound on San Fernando Road when the latter broadsided a Toyota Corolla.

Detective Meghan Aguilar said that the driver of the Corolla, who was not involved in the alleged race, tried to turn left onto Lankershim Boulevard when the collision happened.

The white Charger came to rest at an intersection. The Corolla stopped on the farther up the road due to the impact from the crash. The Toyota sustained heavy damages and made it difficult for officers to determine the car model, Aguilar stated.

The two occupants of the Toyota succumbed to injuries sustained at the scene, according to the agency.

Officials did not intend to arrest the two passengers.

The person behind the wheel of the dark Charger continued east on San Fernando Road. He did not stop to assist the injured, LAPD spokesman Tony Im said.

Authorities have not yet found Saturday the dark-colored car believed to have been racing with the white Charger.

Our firm would like to express our sincere sympathies to the bereaved family and friends of Olivia Enriquez and Leland West.

The Sweet Law Group settles wrongful death, personal injury, car accidents, and disability law cases. Our firm strives to deliver excellent legal support, dedication, and compassion to those they serve. If you are mourning the loss of a loved one, call (800) 674 7852. Our law firm is eager to help you recover and win you full compensation. You still have time to take action.