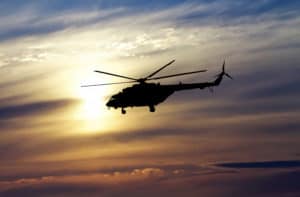 NEWPORT, CA (January 30, 2018) – A helicopter crashed into a Newport Beach home in the Bay View Terrace community, adjacent to the UC Irvine campus, on Tuesday afternoon around 1:45 PM.

Ian Gregor, spokesperson for the FAA, said that the helicopter had departed from John Wayne Airport in Santa Ana, just a mile from the scene of the crash.

The aircraft reportedly struck the roof of another house while coming down, hitting the ground and skidding into the front yard and wall of the home on Egret Court and Shearwater Place. A piece of a tail rotor was found in the tiled roof of a home across the street, and debris was scattered around the section of the neighborhood.

Three people died and two people were injured in accident, according to Newport Beach Fire Chief, Chip Duncan. The Robinson R44 light helicopter was carrying four people, and a person on the ground was injured by fallen debris. The two injured victims were rushed to a nearby hospital with serious injuries.A woman was inside of the home at the time of the incident, but was in the kitchen and sustained no injuries.

The National Transportation Safety Board and Federal Aviation Administration officials are investigating the cause of the crash. No other information and the identities of the victims involved have not yet been released by authorities.

Heartfelt condolences to the family and friends of the victims involved in the horrific accident. Wishing them courage and support in this very difficult time.

If you or a loved one has been injured in an accident, contact the personal injury lawyers at Sweet Law Group. We promise to work day and night, until we achieve the justice and compensation that you and your family deserve. Our experienced attorneys and professional legal team are available to clients 24 hours a day/ 7 days a week through email, text message, phone call, and even online chat. Call us today at (800) 203-3061, to arrange a free consultation at a location near you.