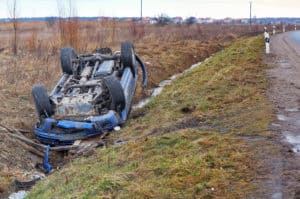 TWAIN HARTE, CA (November 10, 2018) – A boy was injured Saturday evening following a DUI crash near Wildwood Drive. The victim was later identified as 16-year-old Nathaniel Mata, a resident of Jamestown.

Preliminary investigation showed that a Ford F-150 was heading south through a left-hand curve on Joaquin Gully Road when it lost control. The pickup traveled off the road before continuing approximately 70 feet down the embankment and overturning.

Mata suffered major injuries and was transported to Adventist Health Sonora for treatment and medical evaluation. Further details on his current medical condition were not immediately provided. A second passenger, identified as 16-year-old Zackary Bisset of Sonora, did not sustain injuries in the crash.

The 16-year-old Ford driver was arrested on suspicion of driving under the influence of alcohol and booked into the Mother Lode Regional Juvenile Detention Facility. Due to his arrest, the driver’s identity was not disclosed by the California Highway Patrol.

An investigation is ongoing to determine the cause of the crash and to identify other possible contributing factors. Additional information will be released once it becomes available.

Do not get behind the wheel of a car if you find yourself under the influence of drugs or alcohol. By being responsible, you can keep yourself and others on the road safe. When buzzed or drunk, it is best to request an Uber, Lyft, or a taxi. If possible, reach out to a family member or a friend to come pick you up.

If your child has suffered injuries in an accident caused by the reckless driving of a person under the influence, reach out to the experienced personal injury lawyers attorneys at Sweet Law Group. Let our team fight for you, and achieve the compensation and justice that is owed. Call us at (800) 203-3061 to arrange your free consultation with an experienced legal professional in your area. For your convenience, we are also available through email, text message, and online chat.