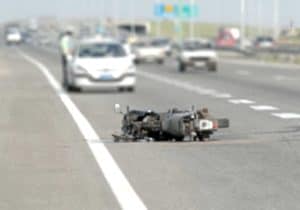 According to the Colorado State Patrol, the incident took place at about 10:15 PM near exit 125. A 32-year-old man was heading southbound on Interstate 25 when he lost control of his motorcycle. He hit a guardrail and side-swiped a 2015 Harley-Davidson, driven by 39-year-old Curtis Grable of Englewood.

The rider then drifted into the right lane and collided with a 2008 Pontiac driven by 24-year-old Pueblo resident Nicole Pavicich. The impact ejected the man from his 2007 Harley, while the Pontiac drove off the right side of the road.

Before coming to a rest, the motorcycle stayed upright and slammed into a 2002 Tahoe that was driving in the right lane. Both vehicles sustained significant damage, causing a fire.

52-year-old Pueblo resident Raymond Lannigan and an unidentified passenger were able to exit the SUV unharmed before the fire started. Unfortunately, the rider suffered severe injuries and was pronounced dead at the scene by responding officers. His identity and city of residence were not immediately released.

Grable was transported to a nearby hospital with moderate and non-life-threatening injuries, while Pavicich was not injured.

Speed, drugs, and alcohol were ruled out as possible contributing factors in the fatal collision, which remains under investigation. It was also noted that the rider was not wearing a helmet at the time of the crash. No other information has been disclosed to the public at this time.

We extend our sincerest sympathies to the family and friends of the deceased victim. May he rest in peace.

If you have lost a loved one in a tragic motorcycle accident, reach out to the attorneys at Sweet Law Group. With over 40 years of experience in the legal field, we have the resources and expertise to win your wrongful death case. Let our team fight for you, day and night, until we achieve the justice and compensation that is owed to you and your family. Call today at (800) 203-3061 for a free case evaluation at a location near you.