Home » Motorcyclist Critical After Crash near Main Street and I Avenue (Hesperia, CA) 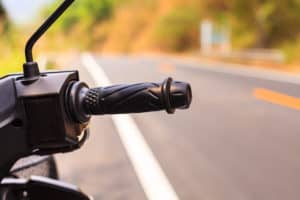 Motorcyclist Critical After Crash near Main Street and I Avenue (Hesperia, CA)

Rider Injured After Motorcycle Collides with Car in Hesperia

HESPERIA, CA (September 3, 2019) — A motorcyclist suffered critical injuries in a crash near Main Street at I Avenue Monday morning.

The authorities said a street bike and a Toyota sedan became involved in the accident. As a result, the two vehicles collided near the driveway of the 76 gas station at around 11:38 a.m.

The firefighters from the San Bernardino County Fire also responded to the crash. After that, they requested a medical helicopter to airlift the motorcycle rider to a trauma center. However, a change in condition prompted paramedics to instead take him to Desert Valley Hospital.

The police said the female driver of the Toyota remained at the scene and cooperated with the investigation. In addition, she wore medical scrubs as per the officers.

The crash prompted the closure of eastbound Main Street between I and Camphor avenues for several hours.

The Hesperia Sheriff’s Station is investigating the accident.

Motorcycle riders rarely escape injury when an accident occurs. If you are riding a motorcycle, do not underestimate the bike’s speed and strictly follow traffic laws and the conditions of the road. For other motorists, do not tailgate a motorcycle and maintain a safe following distance. Give motorcycles a full traffic lane when you pass and remember that they too have equal rights on the road.

Reach out to a seasoned and dedicated personal injury attorney today if you have been injured in a motorcycle accident. The Sweet Lawyers provide the best legal representation that will help you win a settlement. We will work hard to obtain justice and compensation for your injuries, losses, and suffering. You are not alone in this. Call us at (800) 674 7852 for a free consultation.