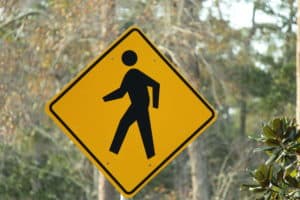 MODESTO, CA (January 10, 2018) – Early Wednesday morning, a man was killed in a hit-and-run accident on Tully Road; police are still searching for the suspect.

A jogger called 911 to report a man lying on the ground, blocking the Valley Grace Community Church entrance, around 5:30 AM.

The victim was described as a black male with white hair in his 60s or 70s, between 5’4 to 5’6 tall, weighing 167 pounds, and wearing a plain blue baseball hat. He was believed to be walking along the east side of Tully with a cane, when hit by the unidentified car.

Police investigated well into the church property and around the site of the crash, looking for any evidence that could have been thrown from the victim or the car that struck him. Police officers found a key in the man’s pocket, leading officers to believe he may have lived in the area and had gone out for a walk, according to Modesto Police Department spokeswoman Heather Graves.

Based on the evidence found at the scene, Police suspect that the vehicle involved in the crash was a black 2001-2003 Honda Civic two-door coupe. According to officials, the vehicle should have visible damage to the front-end, windshield, and possibly to the side passenger panel.

The identity of the man involved in the crash has not yet been released at this time.

Due to investigation of the scene and surrounding areas, Tully Road was blocked off for a few hours until it reopened around 8:15 AM.

If you witnessed the incident, have any additional information, or have seen a car fitting the description of the suspect’s car, call Crime Stoppers at (209) 521-4636. You can leave an anonymous tip if you don’t want to reveal your identity.

The professional staff and lawyers at Sweet Law Group wish the family of the victim strength and courage in this difficult time.

Pedestrian accidents are extremely dangerous and most times fatal. If you have been involved in a hit-and-run accident and don’t know what to do, contact the Sweet Law Group for a free consultation. Call (800) 203-3061 now, to discuss your legal matter with a car accident or wrongful death lawyer and get the compensation that you and your family deserve.