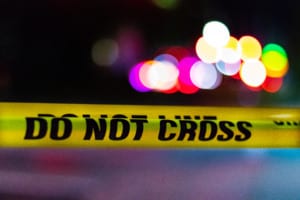 The crash happened around 4:15 a.m. in the southbound lanes of 15 Freeway at Hodge Road.

According to the CHP, a big rig lost control on the freeway and drifted toward the right into the desert. It then overturned while trying to veer back onto the roadway.

A male driver of a 2015 Mazda came upon the crash scene, officials said. The driver stopped his car and ran to help the driver of the crashed big rig.

A second big rig slammed into the first, causing it to burst into flames.

As a result, the good Samaritan and the driver of the first big rig were killed.

The good Samaritan was identified as 49-year-old Michael Robert Keyser.

Meanwhile, paramedics transported the driver of the second big rig, identified as Michael Hensley of Russellville, Tennessee, to a hospital in an unknown condition.

No arrests had been made at this time. The crash remains under investigation.

No words can mend the broken hearts and sorrow felt during this delicate moment. Our deepest condolences are with the families and friends of Michael Keyser and the other victim.

If you have lost a loved one in a traffic accident, please contact the Sweet Lawyers today. It is our goal to provide your loved one the highest quality of legal representation. Our team is dedicated to helping your bereaved family obtain both justice and maximum settlement. Our seasoned wrongful death attorneys will fight by your side and get what you rightfully deserve. Call us for your free consultation at <(800) 674 7852.