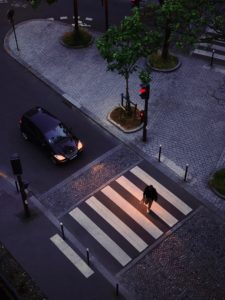 Michael Banta Killed after Being Hit by an SUV on Northeast 72nd Avenue [Battle Ground, WA]

Battle Ground, WA (April 10, 2020) – A pedestrian identified as Michael D. Banta was killed by an SUV in a collision on 18200 block of Northeast 72nd Avenue Monday night.

A 2017 Hyundai Santa Fe was involved in the fatal crash when it hit the pedestrian.

Officers responded to the scene and came across his body lying on the floor with serious injuries.

The report confirmed the identity of the deceased victim.

Michael D. Banta, 51, from Battle Ground, was brought to the nearest hospital in the area.

Later, the victim was pronounced dead due to the serious injuries he sustained.

Meanwhile, the SUV driver stayed at the crash scene and helped the investigation.

Gathered statements, as well as the scene evidence, showed that Banta was on the southbound lane of Northeast 72nd Avenue when the collision took place.

According to the investigators, it is still unclear why Michael D. Banta was on the road at that time.

Moreover, after examining the suspect, deputies confirmed that the SUV driver was not impaired nor intoxicated.

Police are still investigating the case of Michael D. Banta.

We at Sweet Lawyers offer our heartfelt condolences to the friends and family of Michael D. Banta. We wish them strength during this trying time.

If you know a victim involved in a wrongful death accidents, know that help is available. Reach us at Sweet Lawyers so we can help you with achieving the justice and compensation that you and your family deserve. We have our expert attorneys who know how to handle your case. Call us at (800) 203-3061 so we can talk about your options moving forward. Also, you can reach us through our email, online chat, and via text message 24 hours a day and 7 days a week.