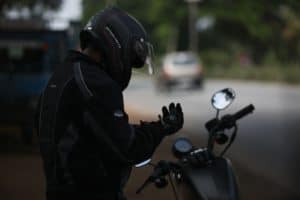 At around 9 p.m., the victim was riding his bike across the said intersection when a Dodge Durango struck him.

On Wednesday, authorities released the first images of a black or dark-colored Durango that is involved in the hit-and-run incident.

“If [the driver] had stopped and rendered aid, we believe that this could have gone a different direction,” Los Angeles police Capt. Jon Pinto said. “Tragically and unfortunately, the driver of that Dodge Durango decided to continue southbound on Main Street.”

Frye died at the scene. But his family said they weren’t informed of his death until more than a week later.

Moreover, Mishy Frye, the victim’s sister said she’d been calling local hospitals and checking jail inmate bookings looking for her brother. The coroner’s investigators only contacted their family on July 6 letting them know that her brother had been involved in a crash.

That is also when she was told that her brother Melvin “Peanut” Frye died at the scene.

His sister said he grew up in the area and that he was known by others in the neighborhood. According to her, he helped a lot of people with their bikes and cars. He even worked in painting and construction.

Mishy Frye said people have been calling her to relay details about the type of vehicle hit her brother. And yet, no one can give the detectives any information.

“I’m just shocked because you guys know him,” Mishy said. “Everybody knows him in this area. Everyone. It’s not right.”

She is positive that people in the area have more relevant details and pleaded them to coordinate with the police.

“I want justice for him, not through you calling me, but call the detectives,” she said. “Holding onto a secret makes you no better than the person that hit him.”

Authorities offer a $50,000 reward in their search for the driver that is responsible for the death of Melvin “Peanut” Frye.

Sweet Lawyers express their condolences to the bereaved of Melvin “Peanut” Frye. May you find courage in this time of grief.

While the loss of a dear one is irreversible, it is in the best interest of you and your family to be aware of what to do next. It is crucial that the family of the victim becomes aware that they have the authority to file a wrongful death suit.

A wrongful death suit allows families to acquire some semblance of justice.

“I think the misconception is that when a loved one passes away, the insurance company and the defendant will automatically admit liability and offer all of the funds available.”

“Insurance companies will try to save money, even if it means not fully compensating a family for the unjust death of a loved one. When a family retains an attorney immediately, it offers them time to grieve their loss, while their attorney begins holding the negligent party accountable,” says Tyler Toomey, a seasoned attorney at Sweet Lawyers.

To conclude, it is best to reach out to the expert attorneys at Sweet Lawyers. We have over 40 years of expertise in the legal field. Call our offices at (800) 674 7852. Also, you may send us an e-mail. Or, talk to our live chat for a free consultation with a professional in your area.