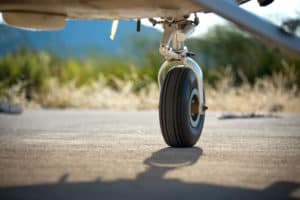 According to reports, a Lockheed Martin KC-130 and Lockheed Martin F-35B “made contact” during a refueling operation. The incident happened around 4:00 p.m. near Thermal, said U.S. Marine Corps 1st Lt. Brett Vannier. Vannier is the spokesman for Marine Corps Air Station Yuma in Yuma, Arizona.

Due to the crash, the KC-130 initiated a forced landing in a field near Avenue 59 and Polk Street intersection. This area is located near the Jacqueline Cochran Regional Airport in Thermal.

Furthermore, the authorities shut down the 59th Avenue between Polk and Fillmore streets while emergency crews worked at the scene.

On the other hand, Vannier said that the F-35B pilot “ejected successfully and is currently being treated.” However, the authorities haven’t released any reports on the extent of injuries sustained by the pilot.

Moreover, the jet crashed near Salton City and caused a fire. Thus, firefighters from the Imperial County Fire Department responded to put off the blaze.

When involved in a plane accident, it is important to have strong legal representation on your side. Above all, make sure everyone involved is in good condition. Then, contact authorities for medical treatment or immediate rescue. After that, reach out to an experienced legal team.

Mark Sweet, a personal injury attorney at Sweet Lawyers, says that serious plane accident cases may call for a separate investigation. This can be spearheaded by an experienced lawyer fighting on behalf of the injured party. A lawyer will make sure victims are not cheated from the proper compensation they are owed.

If you or a loved one was injured in a plane accident, reach out to the experienced lawyers at Sweet Lawyers. We know how to handle mechanical malfunctions and how to fight for the compensation you deserve. Our attorneys and experienced professional legal team have dealt with cases including car accidents, wrongful death, personal injury, and disability. Call our offices at (800) 674-7852 for a free consultation with a professional in your area. For your convenience, you can contact us 24 hours a day/ 7 days a week by email, online chat, and text message.