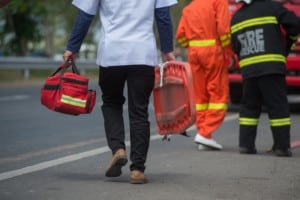 The fatal crash happened around 3:53 p.m. near the intersection of Blanco Road and Reservation Road.

According to the California Highway Patrol, the man was driving a silver Pontiac Grand Am and stopped in the left lane, when his car was rear-ended by a Chevrolet 2500 HD pickup truck. The force of the crash pushed the Pontiac into oncoming lanes and turned it around.

The Pontiac’s driver, whose identity has not yet been released, was pronounced dead at the scene.

The 23-year-old woman driving the pickup was taken to Natividad Medical Center with unspecified injuries. She later told officers that she did not notice the stopped vehicle for unknown reasons.

Reservation Road was closed between Intergarrison and West Blanco roads as of 5:30 p.m. and there was no estimated time of clearing. Motorists commuting between Salinas and Marina were advised to reroute through Highway 68.

At this time, there are no signs of distracted driving, drugs or alcohol contributing to the fatal crash, which remains under investigation.

Our condolences remain with the family and friends of the victim involved in this sudden tragedy. We hope they are brought peace and comfort at this time.

At The Sweet Law Group, we know you and your family are going through a difficult time. While you tend to your well-being and peace of mind, hire us to handle the legal areas of your situation. Our seasoned wrongful death attorneys are upheld by years of training and experience and will never lose sight of your hopes and wishes. Call our hotline at (800) 674 7852 for a free evaluation of your case details.