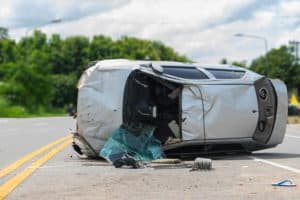 APPLE VALLEY, CA (November 12, 2019) – A man was killed and a woman was critically injured following a rollover crash Tuesday afternoon in Apple Valley.

CHP officials said a white SUV was traveling westbound on Roundup Way when it took a hard left turn. Upon leaving the roadway, it overturned multiples times in the front yards of several homes, before coming to rest about three houses down.

Neighbors helped search for the male driver who had been ejected. They eventually saw him in the driveway of a home.

Paramedics arrived soon after and pronounced the man dead at the scene. The identity of the deceased was not immediately available.

The female passenger was critically injured and was rushed to a hospital.

Authorities are still investigating the crash to determine the cause and factors involved.

Our deepest condolences are with the family and friends of the deceased. We also wish the injured victim a steady recovery.