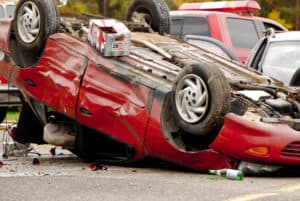 SAN MARCOS, CA (April 21, 2019) – Sunday morning, a man was killed and three others were injured in a rollover car accident on P Mountain.

San Diego Sheriffs responded just before 8:00 AM on a large hilly side area. Allegedly, one of the male passengers involved called 911. Dispatchers arrived just west of North Twin Oaks Road shortly after.

According to police, the involved vehicle was described as a 2015 Chevrolet Silverado. The vehicle had flipped over and the driver was consequently trapped inside as a result.

Per reports, all four occupants were described as men in their twenties. They were transported to a nearby hospital for further medical evaluation, due to their condition. There has been no update on their current condition at this time.

Furthermore, the driver was pronounced dead on scene as a result of the impact. There has been no update on the medical status of the other men involved.

Authorities said the Chevy may have been driven off the road before it flipped over and tumbled down a hill.

It is still unknown what led to the crash. However, officials suspect that alcohol was a contributing factor in the accident.

We express our deepest condolences to the family and friends of the victim during this difficult time.

If you have lost a loved one, or have suffered injuries in an auto accident, contact the lawyers at Sweet Law Group (800) 674-7852. With over 40 years of experience in the legal field, we have a team and the resources to win your wrongful death case. Contact us today for a free over the phone consultation to answer any questions or concerns you may have. We can also be contacted by email, online chat, and text message 24 hours a day/ 7 days a week.