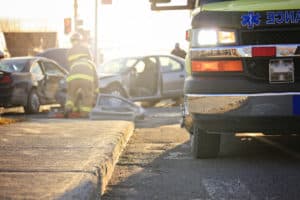 KERMAN, CA (September 18, 2018) – On Tuesday evening, a man was killed in a multiple-vehicle crash on Highway 180. The deceased victim was only identified as a 23-year-old man from Kerman.

According to the California Highway Patrol, the collision took place at approximately 9:50 PM, just west of Napa Avenue. As per reports, the crash involved a big rig that was towing grape trailers, a 2006 Toyota, a 1997 Honda, and a 2003 GMC.

The 23-year-old victim was driving his Honda eastbound on the 180 Highway when, for unknown reasons, veered into the westbound lanes. There, he struck the Toyota, driven by 45-year-old Rodolfo Avila Mojarro. Following the initial collision, 64-year-old Jose Garcilazo-Campo of Mendota was traveling westbound in his GMC and crashed into the Honda, pushing it back into the eastbound lanes.

At this time, the truck driver, 41-year-old Joel Villalobos-Lemus of Palana, was heading eastbound on the highway and also crashed into the Honda. The truck’s load spilled onto the lanes of the highway, shutting down the area for several hours as cleanup and investigation took place.

Emergency personnel arrived at the scene and pronounced the 23-year-old Honda driver dead at the scene. 20-year-old Katia Mojarro, a passenger in the Toyota, sustained major injuries in the crash and was taken to the Community Regional Medical Center. There is no update on her current medical condition, and no other injuries were reported in the fatal incident.

It was not yet known if alcohol or drugs were contributing factor in the crash. Other details are still under investigation at this time by the authorities. No further details have been disclosed.

We at Sweet Law Group send our deepest sympathies to the bereaved loved ones of the deceased victim. Wishing them strength and comfort as they grieve for their loss. May he rest in peace.

If you or someone you love has been involved in a serious auto accident, contact the attorneys at Sweet Law Group. We have over 40 years of experience in the legal field, and we will fight to achieve the justice and compensation that you and your family deserve. Our attorneys and professional legal team have dealt with cases including wrongful death, personal injury, and disability. Call our offices at (800) 203-3061 for a free consultation with a professional in your area. We can also be contacted 24 hours a day/ 7 days a week by email, online chat, and text message.