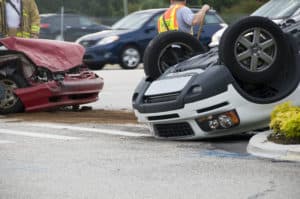 The crash happened around 10:30 a.m. near Ashland Avenue off-ramp.

According to the CHP, two pick-up trucks collided when one attempted to pass the other on the westbound lane. A white truck rolled over into the eastbound lane and its male driver was pronounced dead at the scene.

The deceased, whose identity was not immediately available, was not wearing a seat belt.

The driver in the second truck was not injured and was allowed to drive away from the crash. Officers say he will not face charges in the crash.

Caltrans have shut down all eastbound lanes on the highway and advise motorists to use an alternate route.

CHP officials are still investigating the cause of the crash.

During this time of tragedy, we would like to extend our deepest condolences and sympathies to the family and friends of the deceased. We hope they find strength and comfort as they grieve over their loss.

If you have lost a loved in a vehicular accident, contact our team of wrongful death attorneys at the Sweet Lawyers. We have represented hundreds of clients injured in serious car accidents and other personal injury incidents. Our legal team has also handled hundreds of wrongful death claims for families of victims killed in accidents. There is no cost to you until we have won your case so give us a call today for a free case evaluation at (800) 674 7852