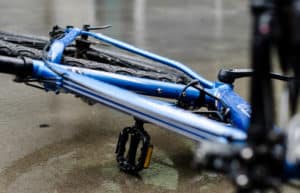 SUNNYVALE, CA (October 20, 2018) – A man was killed in a hit-and-run bicycle crash on Central Expressway, mid Saturday afternoon. The deceased victim’s name, age, and place of residence were not yet released by the authorities, pending notification of next of kin.

According to the California Highway Patrol, the collision took place at approximately 1:40 PM, near Pajaro Avenue. It was not clear if the incident occurred at a bicycle lane.

Initial reports showed that the victim was struck by a minivan that fled the scene, leaving the injured cyclist in the road. Emergency responders arrived at the scene and transported the man to the Stanford Hospital, where he later died of severe injuries.

The suspect vehicle is described to be a red 2004 to 2006 Toyota Sienna minivan. It was seen with front windshield and front fender damage. There is currently no description of the hit-and-run driver. Police released images of the suspect vehicle, captured on surveillance footage in the area.

We at Sweet Law Group offer our heartfelt condolences to the family and friends of the deceased victim. May he rest in peace.

If you have suddenly lost a loved one in a tragic bicycle collision caused by the irresponsible actions of a hit-and-run driver, choose to trust the wrongful death lawyers at Sweet Law Group. Our team has the experience and resources to win your case, and we are here to help you achieve the justice and compensation that is owed to your family. Call us at (800) 203-3061 to arrange your free consultation with an experienced legal professional in your area. For your convenience, we are also available through email, text message, and online chat 24 hours a day/ 7 days a week.