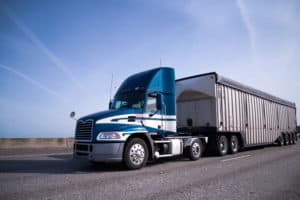 Officials reported the accident occurred around 2:20 AM. In addition, police responded to the intersection of Trade Drive and Martin Luther King Boulevard.

The North Las Vegas Police Department stated that a semi-truck was traveling east on Trade Drive. After that, it collided with a Mercedes. Due to the impact, the Mercedes ended up underneath the semi.

Officer Eric Leavitte said the truck driver was at fault for crossing all lanes on MLK Boulevard. As a result, firefighters needed to use the Jaws of Life to free the man from the Mercedes.

First responders arrived shortly after and transported the victim to the University Medical Center. However, it is unknown if the semi-truck driver was injured in the crash. As a result, the intersection was blocked for a period of time.

There has been no further information released regarding the circumstances leading up to the incident. An investigation continues.

Police do not believe alcohol or drugs were contributing factors in the accident.

There can be several distractions on the road. As a driver, it is your responsibility to drive safely and cautiously. In addition, always keep an eye out for any dangerous conditions or other motorist. Doing so can prevent dangerous accidents from happening.

If you have been injured in a semi-truck accident, call the attorneys at Sweet Lawyers (800) 674-7852. With over 40 years or experience in the legal field, we have a team and the resources to win your personal injury case. Contact us today for a free over the phone consultation. In addition, we will be happy to answer any questions or concerns you may have at a location near you. We can also be contacted by email, online chat, and text message 24 hours a day/ 7 days a week.