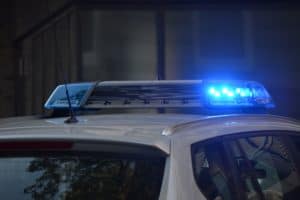 The incident started when a witness reported that a man rammed the window of a car in Walmart’s parking lot in the 1100 block of Broadway.

When the officer arrived, they noticed that the man was a known criminal.

Thus, the officer received treatment at a local hospital. However, the suspect escaped.

After 12 hours, at 2:00 a.m. on Saturday, the National City police found the suspect in a stolen Dodge Ram truck and started the pursuit.

The suspect continued through the city and onto southbound Interstate 805 at speeds more than 100 mph. As the suspect exited H Street in Chula Vista, he made a U-turn. Then, he headed in the wrong direction on the ramp and collided with a National City patrol vehicle.

The impact left the officer with no injuries and the pursuit continued. The suspect headed north in the southbound lanes at high speed. Then, the suspect collided with a Toyota SUV driven by a freelance journalist who suffered a broken arm at E Street.

However, the suspect continued fleeing on foot. Eventually, the officers found him in a different stolen truck and followed him onto the eastbound lanes of state Route 94.

Then, the suspect turned around to drive west on the eastbound side. Thus, he caused another crash.

After some time, the officers managed to catch him near Mount Hope Cemetery. Crews treated his injured leg.

If you feel yourself drifting into other lanes due to fatigue or any other reason, safely pull over and rest before continuing to drive. You can also call a friend or an Uber to pick you up if you feel like it would be unsafe to drive.

Each year, around 20-50 million people are injured or become disabled due to a car crash. To avoid suffering from such incidents, practice safe driving habits on the road at all times.

Even with the best driving habits, it is still important to know what to do if you find yourself in a vehicle accident.

If you’re involved in a serious auto accident, call us. Sweet Lawyers have over 40 years of experience in the legal field. We know what it takes to win your auto accident, personal injury, or disability case. We promise to fight, day and night, to achieve the justice and compensation that you and your family deserve. Thus, call our offices at (800) 674 7852 for a free consultation with a professional.