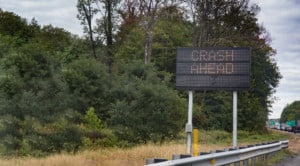 LOS GATOS, CA – One Killed in High-Speed Crash on Highway 17 near Redwood Estates

The crash happened around 5:30 p.m. on Highway 17, just South of the Redwood Estates exit.

According to the CHP, a Toyota FJ Cruiser had been traveling recklessly on southbound Highway 17 at about 100 mph, when it veered off the roadway and nearly hitting several other vehicles before slamming into a tree. The SUV was split into half due to severe impact.

The male driver was ejected from the car and was pronounced dead at the scene. His identity has not yet been released by the Santa Clara Medical Examiner-Coroner’s Office pending notification of his family members.

The crash brought traffic to a halt during the height of the Thursday evening commute, according to the California Highway Patrol. Traffic was backed up for about 7 miles just after 7:00 p.m. and motorists were advised to expect delays and to use alternate routes to avoid the area.

It is unknown if drugs or alcohol played a role in the crash. The fatal crash remains under investigation.

We express our deepest condolences to the family and friends of the victim during this time of grief.

If you have lost a loved one in a wrongful death accident, you should not have to deal with this situation on your own. Consult an experienced wrongful death attorneys at The Sweet Law Group. Although there is no way to bring your loved one back, we can help you sort through important legal matters during this difficult time. Call us today for a free consultation at (800) 203-3061 and allow our team to fight for justice and maximum compensation your loved one and family deserve.