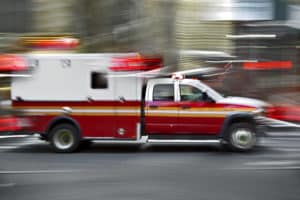 LAKE ELSINORE, CA (November 13, 2018) – On Wednesday afternoon, two people were injured in a car crash on Mission Trail. One of the injured victims was identified as Kat McHenry-Norris.

As per reports, the incident happened around 2:00 p.m. in the 33000 block of Mission Trail, at Bundy Canyon Road. The driver reportedly drove through a strip mall parking lot where it struck a vehicle, a nearby sign, and a Domino’s Pizza restaurant.

According to McHenry-Norris, a female driver of a vehicle pulled into a parking lot from Bundy Canyon Road, drove by a gas pump before making a hard-left turn and striking the driver’s side of McHenry-Norris’ vehicle.

The woman nearly struck a man who was filling up his fuel tank before careening up a curve and mowing down some mailboxes. From there, the driver drove back onto the street, made a U-turn and struck a sign and a boulder before plowing through the glass doors of a Domino’s restaurant.

The identity of the driver was unavailable. Authorities are working to determine the leading cause of this collision and whether mechanical problems played a role.

Distracted driving, impaired driving and speeding all play a role in car accidents. Mechanical failures do, too. It’s important that as drivers, we take our vehicles to a shop and get them serviced and maintained. From topping off our fluids to getting our tires replaced and oil changed, taking care of these responsibilities not only preserves the value and function of our cars but keeps us and others safe. We make it possible for families and individuals to recover and move forward.

The experienced lawyers at Sweet Law Group can help you with your personal injury matter. We know the inner-workings of the legal justice system and assure you of our expertise in personal injury cases. We have assisted numerous clients who’ve been hurt in motorcycle accidents and car collisions. If you would like to explore your case further, call (800) 625-5052.