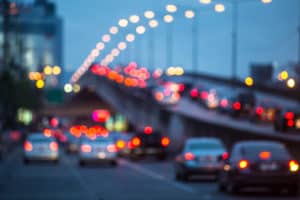 LONG BEACH, CA (April 17, 2019) – A woman was fatally struck by a vehicle following Monday’s two-car collision on the 405 Freeway near Lakewood Boulevard.

The deadly incident befell around 9:40 p.m. on the southbound 405 Freeway.

According to the California Highway Patrol, Judith M. Blankenfeld, of Hilo, died at the scene.

It appears she was an unrestrained passenger in a 2018 Tesla, driven by a 78-year-old man and occupied by a 73-year-old woman – both from San Clemente. The Tesla driver, as well as the second passenger, had their seat belts on, say reports.

In the investigation, CHP determined that the Tesla driver made an unsafe turning movement and collided with a raised concrete curb. Subsequently, the vehicle traveled to the right shoulder and struck an unoccupied parked 2011 Chevrolet.

As a result of the impact, the Tesla’s right-rear passenger door sheared off, pushing Blankenfeld out of the cabin and onto the No. 5 lane. There, a 2008 BMW, driven by 54-year-old woman, fatally struck the Hawaii resident.

The crash left the Tesla driver and passenger with minor injuries. Authorities, however, are still investigating the contributing factors of the accident.

With sincere sympathies, our attorneys would like to send our support and thoughts of strength to those who knew Judith M. Blankenfeld.

The death of a loved one due to a reckless driver is not easy to digest. At the Sweet Law Group, we understand this unfortunate event. Allow us to assist you by representing your case while you recover. We excel in wrongful death, personal injury, disability law and car accident cases. With 40 years of practice, we assure you that we have what it takes to win your case and grant you the assistance you need. Call (800) 674 7852 for a free consultation.