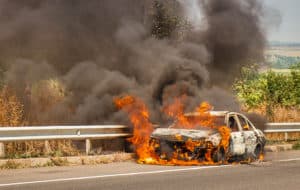 Jeffrey Levi, 37, was driving northbound on I15 near Miramar and Pomerado Roads in Scripps Ranch when he rear-ended a white Toyota Corolla around 11:45 PM. It was reported that he was traveling in speeds over 100 mph his red 2015 Ford Mustang. Subsequently, Levi crashed into a ditch on the side of the road, while the Toyota spun out and came to a stop in the middle of the freeway.

A grey Ford Explorer driven by an off-duty San Diego Police Department (SDPD) detective then crashed into the car, making it burst into flames. Occupants included driver Jesus David Dominguez, 33; front seat passenger Isaac Felix, 18; and backseat passenger Jiovanna Dominguez, 18. They were on their way home to Riverside after dropping off family at the Tijuana International Airport.

Witnesses, including Jose Aguilera acted bravely and removed Jiovanna from the burning car, but were unsuccessful with doing the same with her older brother and boyfriend because of the flames. David leaves behind his wife and two children, ages 5 and 8.

Jiovanna suffers burns, broken bones, and other serious injuries. She was taken to UCSD Medical Center. The detective had moderate injuries and was transported to Sharp San Diego Medical Center.

Levi, a DUI suspect, fled from the scene on-foot after crashing into a ditch near the side of the road, but the police found him in a residential area off the 15 freeway. He was booked into the San Diego Central Jail with multiple murder and felony charges: two counts of first-degree murder, two counts of gross vehicular manslaughter while intoxicated, four counts of felony DUI causing injury or death, three counts of great bodily injury caused during the commission of a felony, and four counts of felony hit-and-run causing injury or death injury.

The fatal and fiery crash caused a closure of all lanes on the northbound 15 freeway, between Miramer Way and Pemerado Road. Traffic was backed up until the following morning.

A GoFundMe page has been set up for the victims’ families.

The Sweet Law Group sends condolences to the families of Jesus David Dominguez and Isaac Felix. May they have strength is this tragic time.

Losing a loved one is difficult as is. But it’s especially heart-breaking, when the cause of the loss was the negligent or reckless behavior of another individual. If someone you love was taken from you abruptly because of the actions of a careless person, contact the experienced California wrongful death lawyers at Sweet Law Group. We will fight tirelessly to get the justice and compensation you and your family deserve. Call now to schedule a free initial visit with one of our attorneys at (800) 203-3061.