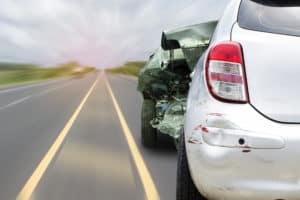 The crash happened around 12:54 p.m. on Highway 74, just west of Winchester Road. According to the CHP, a 2005 Mini Cooper traveled west on Highway 74 when for unknown reasons, it drifted into eastbound traffic and collided with a 2018 Toyota Camry.

The impact caused the Mini Cooper’s engine to fly 40 feet across the westbound lanes. Both the driver and the passenger, who were not wearing seatbelts, were ejected from the vehicle, the CHP said.

As a result, the female passenger in the Mini Cooper died at the scene. Police later identified her as Jennifer Haro-Gonzalez, 36, of Hemet.

The occupants of the Camry, both Perris residents, were also hospitalized with non-life-threatening injuries.

The CHP shut down the entire eastbound side of the highway while they investigated the incident. The closure lifted around 3:00 p.m.

Alcohol and drugs have been ruled out as contributors to the crash, the CHP said.

During this mournful time, we would like to send our well-wishes and sincere sympathies to the grieving family and friends of Jennifer Haro-Gonzalez.