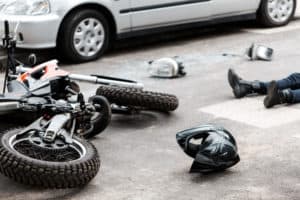 The fatal accident happened at about 4 a.m. on October 14.

Larry’s family visited the hit and run crash site and hung up mementos in his honor.

They and the community are grieving his untimely death.

Furthermore, the authorities have not yet found the driver who killed Larry.

“He was a loving person he was a good father he was loving he was very silly he had a good heart and he was just overall a good person,” his sister, Renee Dunn, said.

Born and raised in the city by the bay, the victim died in this San Francisco hit-and-run.

“We don’t know anything, just that he was hit his motorcycle was in the middle of the intersection and his body was about 60 something feet away,” Dunn said.

Furthermore, a neighbor saw emergency lights and went to the chaotic scene that haunted her since.

“Well it stuck with me and I think about it every day and the more that time goes by the sadder and the more upset I get both about what happened but also the loss to Jeff’s family,” Jennifer Pattee said.

Searching for the Suspect Driver

Moreover, there are no known witnesses who might have seen the hit-and-run driver. As of yet, police do not have a description of who to look out for.

Apparently, the victim is a father of two. He leaves behind a 22-year-old daughter and a 7-year-old son.

Meanwhile, the authorities ask anyone with information to call SFPD.

We understand that losing a loved one is never easy. Our law firm would like to express our heartfelt sympathies to those mourning the loss of Jeffery Larry.

Call Sweet Lawyers at (800) 674 7852 to file a wrongful death claim. Our goal is to focus on your case, while you take the space you need to grieve and heal in peace. Moreover, we will grant you the settlement that you and your family deserve. Above all, we provide personalized guidance and aggressive representation in order to make this process as easy as possible. Thus, if interested in seeking trusted legal support to cover any financial hardships accrued from this accident, do not hesitate to call. Additionally, we are at your reach 24/7.