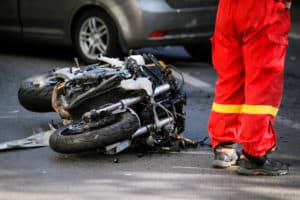 According to reports, 38-year-old James Koch rode his 2007 Yamaha YFR motorcycle on Highway 500 near Northeast Robinson Road at around 2:00 p.m. However, Robin Ray driving an eastbound 2019 Volkswagen Jetta drove across Koch’s lane and hit him.

As a result, Koch flew into the Jetta’s windshield. Responders revived James Koch when they came to the scene.

James Koch sustained a fractured vertebrae in his neck and a fracture at the back right of his skull. Responders rushed Koch to PeaceHealth Southwest Medical Center in Vancouver for treatment.

Meanwhile, the WSP charged 37-year-old Robin Ray with failure to yield the right of way and third-degree driving with a suspended license.