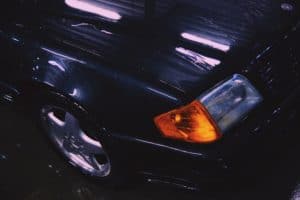 SAN BERNARDINO, CA (March 21, 2019) – Several people suffered pain and authorities arrested one person after a truck crashed into a car on March 20.

There are two crash scenes, a damaged car outside and a nicked hole in the side of the popular dive bar. The incident occurred outside the Party Doll bar, 25461 E. Base Line St. around 12:15 a.m.

Firefighters on scene say they pulled up next to the truck to evaluate the driver when they noticed he was struggling. He tried to escape but ended up striking a white BMW. The BMW was consequently pushed into a telephone pole, before crashing into the bar. Authorities located the truck soon after.

Police arrested 19-year-old James Daily on suspicion of driving under the influence. According to investigators, they believe that he huffed or inhaled fumes from aerosol cans.

Meanwhile, firefighters first tended to the white BMW sedan with three occupants, including two children. They extricated the children from the vehicle, and treated them on scene. Furthermore, the man and a woman with children sustained injuries. No one went to the hospital.

A few moments later, authorities saw a family member carrying the children away in blankets. Authorities told them to converse with the family since they left the area before the deputies’ arrival.

According to reports, eleven people occupied the bar during the collision. Fortunately, no one sustained any injuries. However, Connie Colugh, the bar’s owner, worries about her dog.

“I have a little dog that’s a runaway, and she’s been sleeping at my bar for four years,” she said. “That’s the only thing I worried about, was that little dog.”

If you have suddenly lost a loved one or have a family member injured in a car crash, reach out to the lawyers at Sweet Law Group. We have over 40 years of experience in the legal field, and we know what it to win your wrongful death case. Our attorneys and professional legal team have dealt with a variety of cases including car accidents, wrongful death, personal injury, and disability. Untiringly, we will fight to help you achieve the justice and compensation that your family deserves. Call us today for a free consultation at (800) 674 7852 and speak to an experienced legal professional in your area. For your convenience, we can also be contacted 24 hours a day and 7 days a week by email, online chat, and text message.