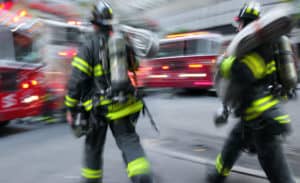 The accident took place on Thursday morning around 2:15 AM on the southbound 5 Freeway near Bridgeport Way and New York Avenue Southwest.

According to reports, a 23-year-old man traveling southbound in a Nissan Maxima passed a semi-truck in the slow lane and swerved, crossing over into the left two lanes. His vehicle crashed into a 1999 Honda CRV, before fleeing from the scene.

The Honda collided into the jersey barrier and hit the overpass pillars before rolling over and landing on its roof. Two people were thrown from the car, and all three occupants were killed. WSP Trooper Travis Joyce said that the engine block from the Honda launched into the northbound lanes, causing another accident where a DuPont Police officer’s patrol car was struck by a semi. No serious injuries were reported in the northbound lane incident.

All lanes of the I-5 southbound were closed, as well as three lanes of the northbound freeway. Traffic was backed up for about 4 miles, and lanes didn’t reopen until several hours later.

The hit-and-run suspect was quickly tracked down and arrested about 3 miles away from the crash, with help from a Seattle Police dispatcher that witnessed the accident and followed him. Officials found shortly after the accident with a woman outside of it, attempting to rip off the bumper.

The Nissan driver was driving without a driver’s license and was suspected of being under the influence. Authorities also found a stolen firearm in his vehicle. He was arrested on suspicion of three counts of vehicular homicide, DUI, felony hit-and-run, possession of marijuana with the intent to deliver, and possession of a stolen firearm.

Heartfelt condolences to the family and friends of Jaime Pelayo Pelayo, Yanez Rodriguez, and Sherry Rodriguez. May they rest in peace.

If you have lost a loved one in an auto accident caused by the reckless driving of a person under the influence, contact the wrongful death lawyers at Sweet Law Group. We will fight for you and your family, day and night, until we achieve the justice and compensation that is owed. Call our offices at (800) 203-3061 for a free consultation, and discuss your case with a legal professional in a location near you.