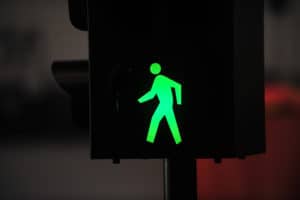 When emergency personnel responded to the scene at 9:49 p.m., they determined that a male pedestrian was hit by a vehicle. The victim who remains unidentified died from his injuries at the scene; he was not carrying any identification.

A preliminary investigation led officers to believe that the man was walking his bicycle northbound from the Fast Track Gas Station parking lot. As the victim was crossing Tehama Vina Road, a 2003 Ford Excursion SUV attempted an unsafe turn from Highway 99 onto Tehama Vina Road and struck the pedestrian.

The driver left the scene but was later found by CHP officers and Tehama County sheriff’s deputies at the River Inn Trailer Park.

Jacob Henry Thomas Cady was the 25-year-old driver from Los Molinos who was believed to have been impaired during the pedestrian crash. He was subsequently arrested at his home and booked into Tehama County Jail.

We’d like to send our deepest thoughts and sympathies to the bereaved family and friends of the victim.

At the Sweet Law Group, we have assisted numerous families and individuals with their wrongful death claim. If you have been involved in a serious car accident and have lost a loved one or have been injured yourself, call (800) 203-3061. We pride ourselves on our hard work and commitment to excellence. We know the ins-and-outs of the legal justice system and will fight tirelessly until we win your case. To obtain justice and reformation and to prosecute the reckless driver for what has happened to you, call us to talk.