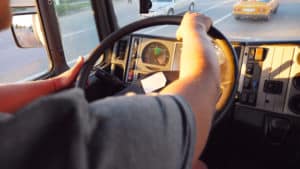 BUTTONWILLOW, CA (December 20, 2019)—A man sustained serious injuries after being struck by a big rig on the 5 Freeway near Buttonwillow Drive Thursday morning.

According to the California Highway Patrol, the incident happened around 1:15 a.m.

An investigation revealed two parts to this accident. 45-year-old Ivan Rivera struck a barbed wire fence and a dirt depression after his southbound 1995 Volkswagen Passat veered off the road. As a result, he over-corrected and travel across all lanes of traffic.

For unknown reasons, Rivera exited his car and began walking eastbound along the 5 South Freeway toward the center median. He then turned around toward the direction of his vehicle, at which point a 2012 Freightliner struck him.

According to CHP officers, 38-year-old Alejandro Maciel attempted to steer to the left to avoid the imminent crash but failed. The impact sent Rivera onto the right shoulder of the highway.

Due to the extent of Rivera’s injuries, paramedics were forced to bring him to Kern Medical Center for treatment. However, reports indicated no word of any arrests or charges.

The streets can be extremely dangerous for anyone driving or walking. Remember to be conscious of the road around you. Drivers aren’t always paying attention or responsible, to begin with. However, if we remember to be leery, we can stand out of harm’s way.

The Sweet Lawyers have settled countless wrongful death cases. The matter is devastating and losing a loved one is never easy. However, as the surviving family, you can acquire the help you need with us to mitigate any unexpected monetary, physical or emotional damages. To hire our compassionate and aggressive wrongful death or personal injury attorneys, call (800) 674 7852.