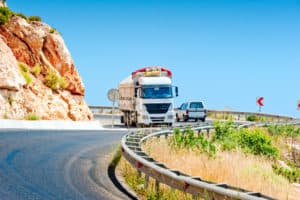 SPOKANE, WA (November 17, 2018) – A hit-and-run motorist was arrested after a DUI crash on eastbound Interstate 90, Saturday morning. The suspect was identified as 26-year-old Isaiah Antoine. His place of residence was not immediately disclosed.

According to the Washington State Patrol, the collision took place near milepost 60 near Evergreen. Based on the report from the troopers, the incident occurred after a reckless black pickup truck slammed into a passenger car. The truck then hit a semi, which spun out of control and landed on its side.

Antoine, the driver of the pickup left the scene after the pile-up accident. He was later found by deputies hiding near the Valley Mall. He was taken to Sacred Heart Medical Center for treatment of unknown injuries. The driver of the semi and a passenger were treated at the scene and later released.

All eastbound I-90 lanes were closed while a clearing operation was conducted. Antoine is facing charges of felony DUI and hit-and-run. No further details have been released to the public, as investigation continues.

Do not get behind the wheel if you find yourself under the influence of drugs or alcohol. Instead, request an Uber, Lyft, or taxi service to pick you up. By driving responsibly, dangerous accidents on the road can be prevented.

If you or a loved one’s safety was put in danger in a crash caused by a DUI driver, contact the experienced auto accident lawyers at Sweet Law Group. We have over 40 years of experience in the legal field, and know what it takes to win your case and achieve the justice and compensation that you deserve. We have dealt with a variety of cases including personal injury, car crashes, wrongful death, and disability. Call us, day or night, at (800) 203-3061 for a free case evaluation by a legal professional in your area. You can also reach us 24 hours a day/ 7 days a week by online chat, text message, and email.