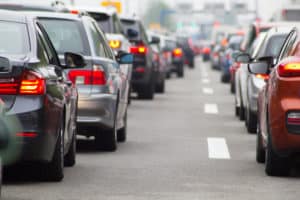 LEBEC, CA (March 23, 2019) – An infant was critical after a multi-car crash on southbound 5 Freeway, Saturday afternoon.

According to the California Highway Patrol, the collision took place at approximately 2:45 PM, near Frazier Mountain Park Road. Based on an initial report, as many as 50 vehicles were involved in two locations, while at least 100 vehicles were trapped between the scenes. Some of the cars were overturned and one was engulfed in fire.

The infant was listed in a critical condition. The paramedics reported that there were more than 30 people who were injured in the major pile-up. Four people were sent to the hospital for treatment of moderate injuries, while seven suffered minor injuries. A horse was also killed in the incident.

The southbound lanes of the Freeway were closed due to the commotion and were reopened at 7:00 PM after clearing and cleaning operations in the area.

Drivers at the scene noted thick fog and poor visibility. An investigation is ongoing to verify all initial information and determine liabilities. Additional information will be disclosed to the public, once it becomes available.

In most cases, negligence and distracted driving lead to multi-car crashes. Never commit such driving mistakes and always exercise precautions. It is important to drive cautiously and abide by all driving laws to ensure your safety and the safety of surrounding vehicles, motorists, and pedestrians.

Call one of the experienced lawyers at Sweet Law Group if you have been involved in a serious traffic accident like a multi-car crash. We have over 40 years of experience in the legal field, and we know what it takes to win your auto accident, personal injury, or disability case. We promise to fight, day and night, to achieve the justice and compensation that you and your family deserve. Call our offices at (800) 674 7852 for a free consultation with a professional in your area. We can also be contacted by email, online chat, and text message 24 hours a day/ 7 days a week.