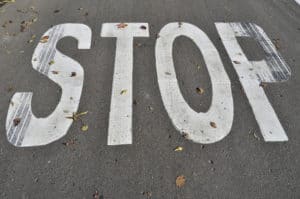 EL CENTRO, CA (May 9, 2019) – A Peterbilt truck and SUV collided at Forrester and West Ross roads Tuesday afternoon, resulting in one injury.

According to a report, a Reach Air Ambulance transported 46-year-old Heather Noonan to Desert Hospital in Palm Springs.

The Oceanside woman suffered serious injuries after her Mercedes SUV was struck by a Peterbilt tractor pulling double trailers, per a California Highway Patrol news release.

In the investigation, authorities learned that Noonan was slowing down for the stop sign on West Ross Road. She allegedly rolled through the stop sign and veered into the path of the northbound Peterbilt at the intersection.

Guillermo Gaona, traveling at speeds of about 55 mph, tried avoiding the crash but became unsuccessful. His Peterbilt struck the Mercedes’ left rear side, sending it spinning off the road into the northwest corner.

The Peterbilt safely came to a stop on the shoulder of North Forrester Road.

Shortly after, emergency personnel arrived and tended to Noonan, who remained in her vehicle. Gaona, 66, however, did not report any injuries at the scene.

Authorities determined that both parties were using their seatbelts at the time of the crash and that alcohol is not a factor.

However, because details are limited, authorities are investigating this case further.

Always make a full stop at stop signs and wait to proceed until the roads are clear of pedestrians and drivers. Accidents happen when we’re in a rush or believe oncoming vehicles will yield to us. Never gamble with your safety and always abide by road signs and traffic lights.

The seasoned personal injury attorneys at the Sweet Lawyers law group are capable of undertaking your case from beginning to end. Right now, it may seem as if nothing is possible. However, we’re fully equipped to help you overcome this time. Our trusted lawyers are diligent, aggressive and compassionate. We aim to be a cut above the rest by providing singular legal guidance to our clients. Contact us at (800) 674 7852 to schedule your free consultation.