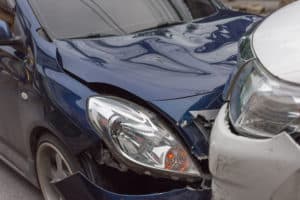 High-Speed, Head-On Crash in Sonoma Injures 4 Including Husband and Wife

According to CHP Officer David deRutte, 62-year-old Gregory Lykken of Forestville was traveling alone in a white Ford sedan when he drove into the oncoming lane and crashed into a white Infiniti QX60. Driving the Infiniti is 53-year-old Jeanne Young of Petaluma.

With Young were her husband, 55-year-old Christopher Young, who was seated in the front passenger seat; and 63-year-old William Wade of Santa Rosa who was in the backseat.

Sonoma County Fire Battalion Chief Michael Elson said first responders pulled out the occupants of the Infiniti by hand while Lykken had to be cut out of his sedan. They had to remove the driver’s door and then used a hydraulic ram to push the dash away from the driver’s legs and feet.

All three occupants of the Infiniti suffered major injuries but were expected to survive. They remained at Santa Rosa Memorial Hospital Monday evening together with Lykken.

It was unclear what caused the driver to drift into the oncoming traffic, but alcohol or drugs were not suspected to be contributing factors, as per deRutte.

Elson said the crash is particularly bad in the sense that it was high-speed and head-on. It was in a location on River Road where there was no shoulder, and it happened on the bridge prompting road closure.

The crash was reported on the bridge that crosses over Trenton Road and blocked the major rural route for about two hours. Officials reopened the roadway after it was cleared of the mangled cars, and vehicle debris and glass.

Sonoma County’s hazmat unit responded to the crash to clean up fluids from the vehicles that were spilling off the bridge and onto the roadway and the shoulder below.

Thousands of automobile collisions each year result from driver fatigue. It is important not to place yourself in a situation that involves driving when you feel tired and sleepy. If you feel it is unsafe to drive, call a friend or an Uber to pick you up to avoid causing or increasing the risk of accidents.

Reach out to the experienced lawyers at Sweet Law Group when involved in a serious traffic accident like a car crash. We have over 40 years of experience in the legal field, and we know what it takes to win your case. Our attorneys and professional legal team have dealt with cases including car accidents, wrongful death, personal injury, and disability. Call our offices at (800) 674 7852 for a free consultation with a professional in your area. We can also be contacted by email, online chat, and text message 24 hours a day and 7 days a week.