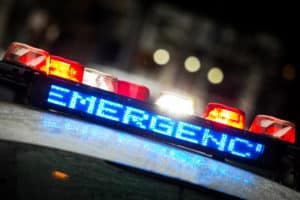 VICTORVILLE, CA (November 30, 2019) – A Good Samaritan died after struck by a car on a busy Victorville street late Saturday afternoon.

The fatal incident crash was reported at 5:07 p.m. on D Street, also known as Highway 18, just east of Hesperia Road.

According to witnesses, a black 2005 Toyota Sequoia was stalled westbound on Highway 18. The two occupants of the SUV were attempting to push it out of the roadway when the Good Samaritan began to help.

While pushing the SUV, a 2001 black Lexus struck them from behind. The impact sent the Sequoia onto a curb and into a signal light pole.

The Good Samaritan was trapped underneath the vehicle. He suffered fatal injuries and died at the scene. He was only described as a Hispanic male adult.

Meanwhile, paramedics transported the two occupants of the Sequioa to a hospital with minor to moderate injuries.

The driver of the Lexus was also hospitalized.

Officials closed D Street for several hours between 8th and 10th Streets while they investigated the incident.