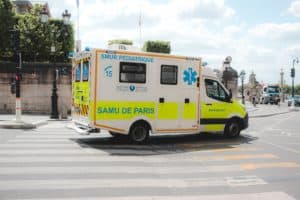 Feather River Canyon, CA (January 20, 2021) – On Monday, 23-year-old Galen Wallace of Oroville was injured, while 43-year-old Tanya Blust of Quincy was involved in a vehicle crash.

Apparently, Blust was driving a 2007 black Ford F-150 truck west of Rush Creek Road at a stated speed of 50 mph.

Meanwhile, Wallace was driving a 2020 white Ford Transit 350 van which was contracted by Fed Ex. He was driving west of Rush Creek at an unknown speed.

The two vehicles were approaching each other in a sharp curve.

Authorities said Blust’s vehicle drifted over the centerline and enter the westbound lane.

Moreover, airbags of both vehicles were deployed as both of the vehicles rotated counterclockwise. The F-150 rested facing northwest and blocked both lanes of Highway 70.

Then, the van rested facing west on the north shoulder of the highway.

Immediately after the crash, Blust was able to climb out the driver’s door through the broken window.

On the other hand, Quincy Volunteer Fire Department extricated Wallace from the van. They airlifted him to Enloe Medical Center for his major injuries.

If you feel yourself drifting into other lanes due to fatigue or any other reason, safely pull over and rest before continuing to drive.