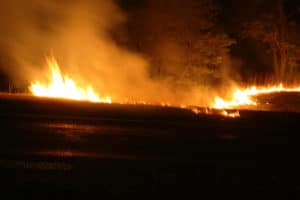 According to the San Bernardino Police Department, the incident happened at about 10:46 PM. A Ford van was traveling south on North D Street when it collided with an eastbound Lincoln Navigator. Then, the SUV slammed into a building and caught fire.

The two occupants of the Navigator managed to exit the vehicle on their own. Emergency responders rushed them to a hospital with life-threatening injuries. Updates on their current conditions remain unknown.

Two passengers in the van, a 13-year-old juvenile and an 18-year-old man, suffered non-life-threatening injuries and were hospitalized.

Meanwhile, authorities arrested the van driver, identified as 44-year-old Jeffrey Dakarai, on suspicion of DUI and child endangerment. He was held at the San Bernardino County Sheriff’s Central Detention Center in lieu of $100,000 bail.

Do not attempt to drive when under the influence of drugs or alcohol. In addition, reach out to a family member or a friend to come pick you up.

If you or your child has suffered injuries in a DUI accident, reach out to the personal injury lawyers at Sweet Lawyers. With over 40 years in the field, we know what it takes to protect your legal rights. Call our offices today at (800) 674-7852 for a free consultation at a location nearest you. Also, you can also reach us through email, online chat, and text message 24 hours a day/7 days a week.