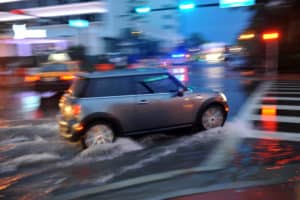 According to officials, after their SUV crashed, the woman was carried for miles in a flooded canal.

Heartland Fire Department Battalion Chief Brian Hayward revealed that the 68-year-old woman traveled with her husband despite the heavy rain westbound on the 8 Freeway.

Later, their SUV crashed into the Forester Creek canal near First Street and Naranca Avenue.

After they crashed, the SUV and its occupants were swept away by a strong flow of water rushing through the canal.

A half-mile away from the crash scene, the SUV stopped after being wedged under the 1st Street underpass. As they attempted to free themselves from the vehicle, the woman fell and was then swept away by the rushing water.

“A man and his wife were in the creek and he could not hold on to her, so she floated down the river,” Hayward stated.

The Swift water rescue crews, firefighters, and law enforcement personnel all responded to the area and searched the canal to locate the woman. However, the river was flooded with water rapids, making it hard for responders to spot her.

After thirteen minutes, the rescuers found the woman in Forrester Creek, almost five miles and in a different city. The crews stationed on Prospect Bridge spent 30 minutes extricating her from the water. The responders utilized a pole.

Hayward added that the woman was alive but unconscious when they took her to Grossmont Hospital. However, the CHP revealed that she later died on Wednesday. Her identity remains unreleased due to pending family notification.

Meanwhile, the husband of the victim didn’t suffer any injuries.

The California Highway Patrol is currently investigating why the car lost control on the 8 Freeway. According to reports, the car hit an on-ramp metering light, fell down an embankment, and crashed through a chain-link fence before falling into the canal.

The crash also broke the SUV’s windows. The CHP said they couldn’t recover the vehicle until the water levels dropped.

The authorities also ruled out drugs or alcohol as factors in the collision. The two occupants both wore seatbelts during the collision.

Sweet Lawyers extends our deepest sympathy to the family and friends of the woman who passed in this crash.

Trust the experienced lawyers at Sweet Lawyers when involved in a serious traffic accident. We have over 40 years of experience in the legal field, and we know what it takes to win your wrongful death case. We promise to achieve the justice and compensation that you and your family deserve. Call our offices at (800) 674 7852 for a free consultation with a professional in your area. You can also reach us via email, online chat, and text message 24 hours a day and 7 days a week.