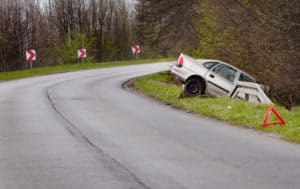 Edwin Steighorst, 49, was driving with his dog early Monday morning, when he swerved off the right of the 10 freeway between Indio and Blythe in Coachella Valley. His 2018 Hyundai Elantra went airborne and landed in the boulders in a ditch.

His car was found by officers on its roof. The crash caused a small brush fire near the road, which was quickly contained by the Riverside County firefighters. Both Steighorst and his dog were pronounced dead at the scene.

This location is a notorious for accidents, and similar incidents have been reported in the past.

Authorities stated that the victim was wearing a seatbelt, and that they don’t believe drugs or alcohol were contributing factors in the accident. It remains under investigation.

We send prayers and thoughts to the family and friends of Edwin Steighorst and his furry companion.

Let the experienced California wrongful death lawyers at Sweet Law Group legally represent and guide you and your family through this difficult time. We know what it takes to win and will work day and night to achieve the justice and compensation that you deserve. Call now for a free case evaluation (800) 203-3061.