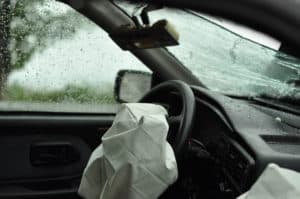 According to the California Highway Patrol, the incident took place at about 10:13 AM near Devere Mautino Park. A Nissan Altima, driven by Zaworski, was heading north on Alta when it failed to avoid a slowed Chevrolet pickup truck that was attempting to make a right turn.

The impact of the crash caused the Nissan to overturn and to land partially on the front of a southbound Ford Ranger.

The driver of the Ford, identified as 34-year-old Jeremy Hlebichuk of Nevada City, refused treatment but was later rushed to the Sierra Nevada Memorial Hospital due to suspected minor injuries. Meanwhile, Zaworski was airlifted to the Sutter Roseville Medical Center, where she is expected to survive. Further updates on their current medical conditions were not immediately available.

Distracted driving and high speed are believed to have been factors in the crash, which remains under investigation. It is unknown whether or not the involved parties were secured in their seatbelts. No additional information has been disclosed to the public at this time.

When driving, it is important to keep your distance from the vehicles ahead of you, especially when traveling at high speeds on the highway. Always pay attention to your surroundings for fellow motorcyclists, pedestrians, bicyclists, and other cars that are sharing the road. By obeying traffic rules and driving defensively, dangerous accidents can be prevented.

Reach out to the experienced lawyers at Sweet Law Group when involved in a serious traffic accident. With over 40 years of experience in the legal field, and we know what it takes to win your case. Our attorneys and professional legal team have dealt with cases including car accidents, wrongful death, personal injury, and disability. Call our offices at (800) 203-3061 for a free consultation with a professional in your area. We can also be contacted by email, online chat, and text message 24 hours a day and 7 days a week.